On September 23, 2012 Itacoil has been awarded by the Milan Chamber of Commerce with the gold medal for the “Milano Produttiva 2012” award in recognition of the multi-annual duration and the ethicality of the business, concerning work and presonal and business activities. 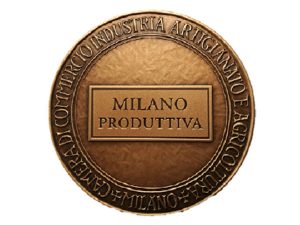 ORIGINS OF THE AWARD
On October 18, 1929, the then Provincial Council of the Economy of Milan established annual awards for praiseworthy clerks, workers and campaign agents who have worked for many years for companies registered in the Council.
To this end, the Council allocated the total amount of Lit. 12,000 (about 6 €), to be assigned to workers who had given praiseworthy service, uninterruptedly and at the same company for at least 30 years.
On November 30, the Central Directorate of Trade and Economic Policy of the Ministry of Corporations approved the institution of the award. Following this act, the General Secretary of the Ambrosian Provincial Council, Guglielmo Tagliacarne, authorized its start-up, in whose final ceremony of the first edition – held on May 25, 1930 in the courtyard of honor and the rooms of the Castello Sforzesco – the then Head of Government participated.
As part of its institutional activities to promote and support the economic activities of the province, from these premises the Chamber of Commerce of Milan (heir to the aforementioned provincial council) has organized the traditional award of loyalty to work and economic progress annually.
Since 1989, the competition has taken the name of “Premio Milano Produttiva”, renewing the structure of the announcement and the award ceremony, an event considered to be among the most significant by the local economic system and by the social and productive metropolitan context.